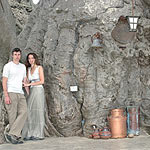 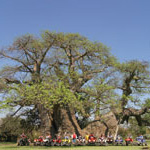 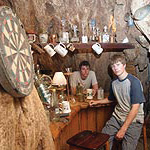 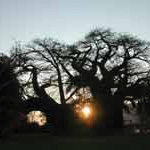 Largest Baobab – At Sunland Nurseries this baobab (Adansonia digitata (467) boasts a girth of 46.8m  and estimated to be approximately 1000 years old.  The existing cavity in the tree has been created into an unique pub which can accommodate up to 15 people.

Carbon dating has been used to estimate the Big Baobab’s age at ± 1000 years.

Sunland’s Baobab is 22 meters high, and is some 47 meters in circumference. It is still (and is likely to remain so) "the record holder for the species", according to the SA Dendrological Society.

In 1993 the van Heerdens cleared out the hollow centre of the tree, removing masses of compost build up, to uncover the floor about a meter below ground level. In the process they found evidence of both Bushmen and Voortrekkers, attesting to the historical importance of the tree.

They squared off a natural vent in the trunk to make a door and installed a railway sleeper pub inside the trunk, complete with draft beer, seats and a music system.  One party had 60 people inside the tree bar!. A wine cellar was installed in a second hollow, with a constant temperature of 22° C, ventilated by natural vents.

The tree blooms gloriously in spring. It is home to many bird species, including two pairs of owls.

This baobab is a must see tourism attraction for any visitor to the area.